Tilix uses a GTK+ 3 widget called VTE (Virtual Terminal Emulator). The VTE widget was originally designed as the back-end for Gnome Terminal but was fortunately designed as a GTK widget so that other terminal emulator applications could leverage it instead of rolling their own. Many popular Linux terminal emulators use this component.

One aspect of VTE configuration is the use of /etc/profile.d/vte.sh. The VTE uses this script to override the PROMPT_COMMAND in order to feed itself additional information via terminal control codes. In particular, this script is used to tell the VTE the current directory of the shell. Previously the VTE component used to read this from /proc/<pid>/cwd however according to VTE upstream there were a number of issues with this approach and hence the change to /etc/profile.d/vte.sh.

The issue with this change though is that different distributions treat /etc/profile.d differently. The expectation is that when a shell is initiated all scripts in /etc/profile.d are executed. On Fedora, this works as expected for both login and non-login based shells. However, other distributions (Ubuntu and Arch at least) only execute scripts in /etc/profile.d for login shells. The problem with this is the default configuration for most terminal emulators using VTE, including Gnome Terminal and Tilix, is to not run the shell as a login shell.

This means that on some Linux distributions vte.sh never gets executed and VTE loses certain features that are dependent on the PROMPT_COMMAND. In particular, the two features that we know are impacted:

Fortunately fixing this issue is quite easy, you can do either of the two options below.

Update ~/.bashrc (or ~/.zshrc if you are using zsh) to execute vte.sh directly, this involves adding the following line at the end of the file.

If you use a custom PROMPT_COMMAND instead of simply overriding PS1 you also need to update your PROMPT_COMMAND to append working directory information. This can be achieved by calling __vte_osc7 which gets defined when you source /etc/profile.d/vte-2.91.sh.

Enable the option in your Tilix Profile (under Preferences) to use a login shell, the screenshot below shows the option that needs to be checked. 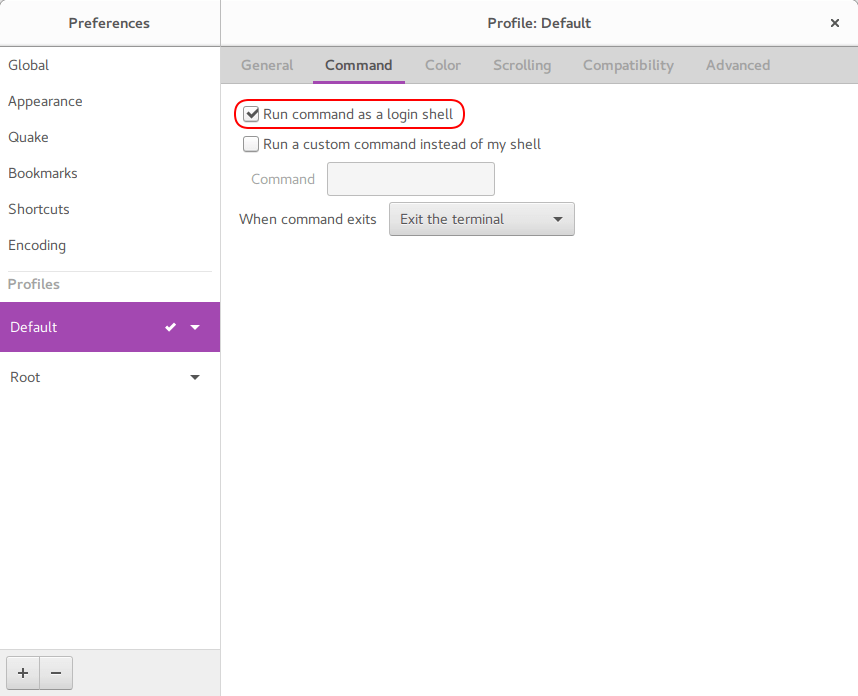